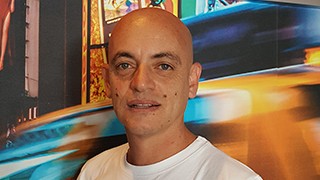 Aki Georgiou, owner of Zambian based sign making company, Six Light Media, has been in the signage and print industry for over 20 years. He talks about how he differentiates his business by re-inventing himself and his offerings.

In the early ’90s, Georgiou was Director and Co-Founder of Adworks Advertising in Lusaka. Within two years, they had affiliated themselves to McCann Erickson, which opened doors to multinational clients, who used billboards as their main adverting stream in Zambia. The company managed to get contracts with the local city councils and put up their own boards, most of which were sign written. ‘Printing the boards was our next biggest hurdle as there were no printers to source locally and we ended up importing prints from Europe at very high costs.’

Georgiou and the team later started a new company, GrandAd Digital Printing, and imported their first digital printer. GrandAd’s philosophy was to provide high quality and high speed printing. And as such, the company grew at an exponential rate. Clients were able to get their prints within 24 hours. They had become a one stop shop, offering designing, printing and delivery all the way to installation country wide. ‘In 2008, we sold the company and took some time off but after five years, we felt a need to get back into digital printing and 3D signage.’ That is when Six Light Media was started.

Georgiou said that the company installed state-of-the-art machinery that was the first of its kind in Zambia such as: the EFI Vutek Flatbed printer, vaccuum forming machinery, industrial laser cutters, plasma cutter, CNC aluminium channelling machine for 3D Letters and a CNC router. They were back in the game and were well received. Six Light Media had higher output, offered better quality work and a more diverse product range. Apart from the standard printing, they now offer a full catalogue of 3D signage, and can design and fabricate anything according to clients’ specifications, and all this is done in-house.

Georgiou is a gadget geek who loves machinery, so he thrives in the digital printing and signage industry as there is no shortage of high tech toys. ‘Being part of the creation of a sign from the design all the way through fabrication and finally installation is very fulfilling. And nothing pleases me more than to see a happy client admiring their new sign.’

‘Everyone is a copycat, so if you’re good at what you do, expect to be copied. Competition is also at an all-time high, due to the advent of cheap printers.’ He said that almost anybody can afford to enter the market. There were originally less than a dozen printers in Lusaka but there’s close to 150 now. Although the majority are small companies with small machines and less than five employees, they still have a major impact on the printing and signage industry in Zambia.

‘With the introduction of low cost digital printers, there is a trend to use cheap generic inks. Most competitors’ outdoor prints start degrading within three months. Within a year, the prints look completely washed out and faded. The prints might be cost effective, but the damage done to the client’s brand costs much more.’

He said that social media has become a big player in the marketing of products and for a relatively small amount of money, companies can target a specific demographic. ‘You no longer need to have a print shop on a main road to be noticed.’ However he said that social media has its drawbacks. ‘Social media is a like a highway that has far more traffic, but it is vital to beware of the evil of the internet. You might make a mistake and find out just how ruthless disgruntled consumers can be on various platforms if you don’t react appropriately and correct your errors.’

Georgiou enjoys riding both on road and off-road bikes. He takes his children 4×4-ing in the bush, which allows them to spend quality time together and gives Georgiou the opportunity to teach his children the lessons that he learnt growing up on a farm. He added that these days everything is about family, so he tries to find things that the kids will enjoy, be it camping, fishing or anything that gets them outdoors.

Georgiou believes in having perseverance, being creative and always being a step ahead of the competition by re-inventing himself and his products. He lives by his father’s philosophy to ‘Be a gentleman and keep your word’. He further emphasised, ‘Your word is your honour, once it’s gone, you have nothing. I always try and keep my promises in all aspects of life, both socially and professionally.’

Gear Up For Business Growth With The Sign Africa Bloemfontein Expo

Midcomp Is First HP Reseller In The World To Implement Pay...