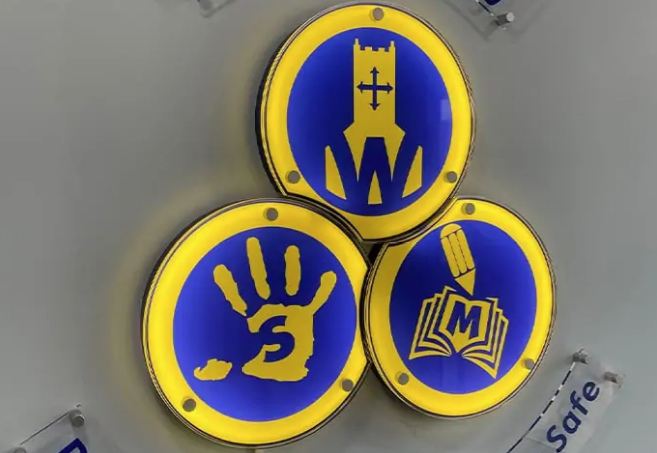 An inventive illuminated wall sign supplied by Lincoln-based Venture Signs to Welton St Marys School really brightens up the school’s reception. It also makes a point that there is still scope in the field of signage for an inventive approach to design and construction.

The team at Venture Signs went the modern route in providing its school signage with an appropriate source of modern illumination. LEDs beat at the heart of its reception sign. The LEDs are surface mounted and pre-spaced on flexible strips. Power to the LED strips is supplied through a low-voltage driver, which also happens to incorporate an RF receiver so various aspects of the sign’s lighting can be remote-controlled.

The physical construction of the sign is based around 8mm thick clear acrylic. The elements are machined to form three interlocked circles. Each of the circles takes a bite out of its neighbour and all are mounted on the same plane.

The face of each circle carries an element of the school’s logo. The design detail is printed upon Metamark MD-CR Metamark’s optically clear print receptive polyester film. The LED lights are diffused through a layer of Metamark MDT translucent film.

Light and acrylic behave in interesting ways together. Light will bounce around endlessly within a sheet of acrylic, exit where it finds a point of interference and impart an almost animated combination of highlights and contrasts within the mass of the acrylic itself. Venture Sign’s construction really capitalises this on these effects.

It is always said that the foundation of great design nods towards contrasts and there is little that contrasts quite as well with its surroundings as an illuminated sign. Modern construction techniques and modern sources of illumination mean that lit signage can now be used in venues that would once be out of bounds because of the physical dimensions of the signage or the cost. Venture Signs’ work for St Marys makes the point that illuminated signs belong on a great many more shopping list these days.