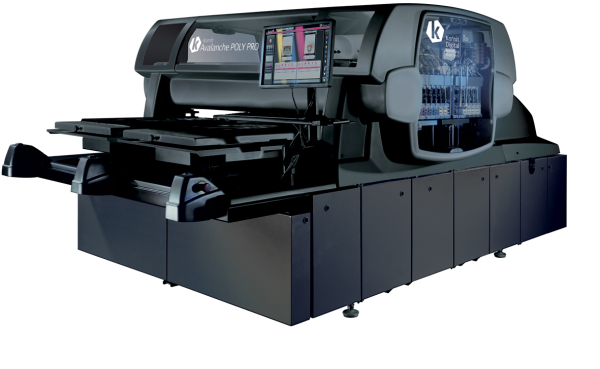 Established in 1995 as a print shop committed to producing one-off jobs with the efficiency of mass production (and avoiding costly inventory), Tokyo-based Image Magic has long sought an alternative to slow and inconsistent means for imprinting synthetics. Introduced earlier this year, Kornit’s Avalanche Poly Pro is the first digital direct-to-garment print system developed specifically for such materials.

‘We have long printed cotton materials on demand, but delivering polyester T-shirts and sports apparel in a consistent and timely manner remained a challenge,’ said Makoto Yamakawa, Image Magic CEO. ‘Kornit’s Poly Pro system offers the best possible quality, at a speed to match our recent increase in orders, which we expect will continue as more major sports events, most notably the Olympics, come to Japan.’

‘I was impressed by the smooth hand feel,’ added Yutaka Bono, their director of development. ‘The Poly Pro is ideal for handling a wide variety of products in small quantities, which should help us attract new customers, particularly from the sports industry.’

Using the eco-friendly NeoPigment Olympia ink set, Kornit Avalanche Poly Pro was developed to extend digital design complexity, colour gamut and durability to polyesters, which have grown in popularity as a result of sportswear and ‘athleisure’ trends.

‘Kornit is breaking down boundaries between what the consumer demands and what print shops can deliver at the speed of e-commerce, and our Poly Pro system embodies that effort completely,’ said Andy Yarrow, president of Kornit Digital Asia Pacific. ‘Image Magic has achieved considerable growth by giving consumers what they want with a smart, lean business model, and we are proud they’ve chosen Kornit as a partner in taking their next steps forward.’

According to Yamakawa, digital printing has been key to his business’s growth, and he foresees Kornit’s technology building on that strength. ‘We’ve been inviting partners and customers to our facility to demonstrate what the Poly Pro can do, and as we expand to a larger facility, we anticipate investing in more of these systems,’ said Yamakawa.

Read the top 5 stories weekly on WhatsApp or sign up to our newsletter.