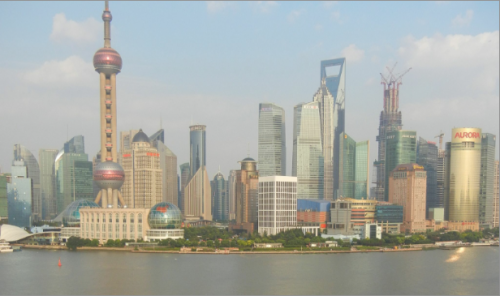 FESPA China 2013, will take place in Shanghai at the Shanghai World Expo Exhibition & Convention Centre (SWEECC) from 18 – 20 November 2013. An international metropolis, Shanghai – meaning ‘Above the Sea’ – is the commercial and financial centre of mainland China.

A city with a mix of Chinese tradition and the hi-tech western world, 10 million people travel to Shanghai every year to discover its multicultural flair, its strong cultural heritage, new skyscrapers which draw the city’s skyline and its Ancient and Water Towns and Temples.

FESPA CEO Nigel Steffens said, ‘FESPA China will add fresh dimensions to the long-established CSGIA exhibition, which alternates its location between Shanghai and the southern city of Guangzhou. Our aim is to develop FESPA China to become an international wide format printing event, attracting global exhibitors and visitors from across Asia. With that as our main objective, we could not have a better host city than Shanghai. This is one of the world’s most dynamic and fast-growing mega-cities. It offers international exhibitors a stable political and economic environment in which to do business, and delivers the calibre of visitor facilities expected by international business travellers.’

Visitors travelling to Shanghai will require a visa prior to their trip. Visas can be issued for various durations and can allow for one, two or multiple entries. Visa fees vary depending on the traveller’s nationality, number of entries required and the country the visa is applied for in. There a few nationalities where no fee is required including Albania, Bosnia, Bulgaria, Herzegovina, Maldives, Micronesia, Pakistan and Slovakia.

From the 1st of January 2013, residents of 45 countries and regions including, the USA, United Kingdom, Canada, Australia, New Zealand, Mexico, Brazil, Russia, Singapore etc. were granted a visa-free stay of up to 72 hours when taking an international transfer via Shanghai Pudong or Hongqiao airports.

Shanghai’s metro system is a popular mode of transport in the city. It has 12 transport lines, all of which link to line 8 which serves the SWEECC at Yaohua Road and China Art Museum. Arriving from Shanghai’s international airport, visitors can take the Maglev train direct to the city in less than eight minutes. The Maglev train line was built to impress visitors as they arrive into the city and a single ride on the Maglev is 50 yuan (around €6 and $8).

For visitors wanting a view while getting about, ferries run between Pudong and Puxi and are a great way to see the Shanghai skyline. Buses run all over the city and stop directly outside the SWEECC for visitors to take advantage of, as well as points of interest such as Shanghai Railway Station, People’s Square, Xujiahui, Zhongshan Park Wujiaochang and Shanghai Indoor Stadium.

While visiting FESPA China, visitors should take in the sights and sounds of Shanghai and explore some of Shanghai’s most popular tourist spots.

The world famous Bund (Waitan), or the waterfront, is an architectural showcase including Gothic, Baroque, Romanesque, Classicist and Renaissance buildings, and a ‘must-see’ for the visitor to Shanghai. The word “Bund” comes from an Anglo-Indian word for an embankment along a muddy waterfront. The Bund in Shanghai rose to prominence in the city when the first British company opened an office there in the mid-19th century.

Yuyuan Garden is the only fully restored classical Chinese garden in Shanghai. Conceived during the Ming Dynasty in 1559 as a private garden, the garden occupies less than five acres demonstrating the art of combining several different elements to create a miniature world. There are more than 40 scenic spots throughout the garden for visitors to capture.

For visitors interested in Shanghai’s cultural heritage then a trip to Qibao Ancient Town and Zhujiajiao Water Town is essential. Qibao Ancient Town is located in the Minhang district. With a history that spans more than 1000 years, it is the only ancient town to form part of greater Shanghai. Within Qibao Town people can also attend a shadow play, a traditional feature of Shanghai culture that originated in Qibao Town. The plays are based on historical events in local dialect and are performed using colourful drawings and expressive music to illustrate emotion.

Zhujiajiao Water Town – Shanghai’s Venice – is an ancient water town with a history of more than 1700 years, located in one of Shanghai city’s suburb. The town covers 47 square kilometres and is the best preserved town among the four ancient Shanghai towns. In Zhujiajiao visitors will find old bridges crossing the rivers, historic buildings and gardens satisfying a different Shanghai experience from the bustling city centre.

The Huangpu River, also known as the ‘Mother River’, is the source of most of the drinking water for the residents of Shanghai and flows through the city into the East China Sea. Visitors can enjoy the Shanghai landscape by sailing down the river – best at dusk – appreciating both the old and new styles of the city including the Bund and the 21st century cityscape of Pudong.

Perhaps one of Shanghai’s most recognisable landmarks, the Oriental Pearl TV Tower, the 467.9 metre tower is a popular tourist attraction located in the Pudong District. Completed in 1995, the highly innovative design has become a symbol of excellence in architecture and a well-known sight for tourists. The Tower is multifunctional, inviting visitors to eat, shop and observe the Shanghai landscape. It takes only 40 seconds for visitors to enter the upper superdome sphere, an ideal place for a bird’s eye view of the bustling Huangpu River and The Bund. And if you like your bird’s eye view accompanied by a cocktail, head to Shanghai’s Grand Hyatt hotel, where the 87th floor Cloud 9 bar ranks among the world’s highest bars, and was tipped by Newsweek as one of the World’s Greatest Gathering Places.

Shanghai cuisine, also known as ‘Hu cuisine’ is a variance of Chinese food, associated to the surrounding provinces of Jiangsu and Zhejiang. Shanghai dishes are usually characterised by a flavoured sauce or alcohol.

There is a range of ‘Hu cuisine’ for visitors looking to sample Shanghai delicacies during their visit. ‘Beggar’s chicken’ is of southern origin wrapped in lotus leaves and covered in clay. The ‘lion’s head’ is another local favourite, simply pork meatballs in a brown sauce. Shanghai fried noodles, a regional variant of the popular Chinese dish, chow mein, is unique to Shanghai made with a Shanghai-style thick noodle. Lime and ginger flavoured century egg and stinky tofu are also popular Shanghai dishes.