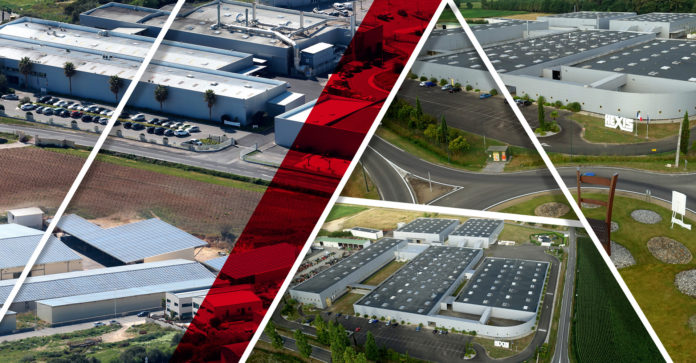 HEXIS, a leading manufacturer of self-adhesive films used for visual communications, is celebrating three decades of innovation. The group’s headquarters are located in Frontignan, near Montpellier in the south of France, with a factory of 19,500sqm. A second production site of 24,000sqm is located in Hagetmau (in southwestern France).

The group employs 380 people around the world, including 280 in France. The company specialises in the manufacturing and distribution of high-performance cast PVC, PU and latex films. It also develops innovative product ranges for digital printing professionals, sign makers, signage and vehicle marking specialists, as well as textile marking professionals.

Application areas include: billboards, lightboxes, signs, decoration of premises and objects, vehicle markings (cars, trains, tramways, boats, airplanes and more), markings of textiles, lamination etc.
HEXIS produces more than 22 million square metres of self-adhesive films per year, and in 2018 achieved a consolidated turnover of R1.4 billion (94 million Euros), 55% of which is in international markets. The company is targeting a turnover of 2.4 billion (160 million Euros) by 2020.

To achieve this, all teams are working on improving the quality of the products, processes and continued development of the company’s production tools. Since 2017, the group has launched an investment plan with a commitment of R265 million (€17 million) supporting the company’s strategic plan until 2020. These investments simultaneously involve the acquisition of land, the modernisation of production tools and an additional brand new manufacturing line.

This plan will enable the HEXIS Group to own two fully autonomous production sites, which is crucial for its sustainability and continued growth. This increased production capacity will allow the group to become a major player in supplying premium products to a fast growing market for high-tech products. The company has been granted ISO 9001 certification (awarded June 2015) for its quality management system, and ISO 50001 certification (awarded October 2016) for its energy management.

Constant innovation in the field of adhesives and cast films has always been a powerful driving force of HEXIS’ growth. HEXIS invest 3% of their turnover in R&D and employ 25 experts in their laboratories at Frontignan and Hagetmau. The R&D laboratories are very much involved in the development of colour plotter and printable cast films as well as in the development of major innovations such as antimicrobial films intended to combat bacteria proliferation in public areas as well as new ranges dedicated to textile markings and to car body protection (e.g. BODYFENCE film).

The development of ecological product ranges continues, with the launch of a new generation of films made from aqueous emulsions (latex, PU, etc.) These PVC-free films have been designed for top-of-the-range visual communication. They satisfy even the strictest requirements of sustainable development. The new production technology with an aqueous base reduces the quantity of solvents used during the manufacturing process by 70%. These products comply with regulations and do not contain chlorine, phthalates or heavy metals.

Today, the self-adhesive film market is subject to more and more innovation, which allows the company to continue diversifying its product range. HEXIS has been offering self-adhesive films for several years now, as paint replacement solution and surface protection on high-speed, regional train carriages, and tramways in France and abroad. The carriages of underground trains in Paris, London and Madrid use HEXIS products, combining both aesthetic coherence and protection against degradations. Customised and tailor-made products concerning these high-technology films are increasingly common. New markets are also opening up, with the use of self-adhesive films in design, decoration and both interior and exterior architecture.

Thanks to this diversification and the considerable added value technical films represent, HEXIS has taken up the challenge of globalisation and, up-to-date, export half of their production worldwide through their six subsidiaries and around fifty distributors monitored by the export department.

Wrap Of The Week: CRD Wraps